A Philosophy of Quality 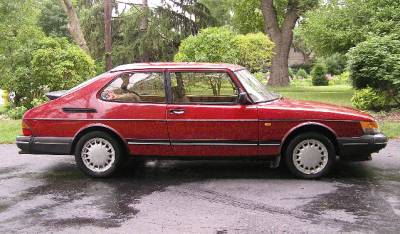 I posted this not to "show off" (the thing set me back a mere 1,500 $) but to make a point: Saab automobiles are pioneering marvels, built according to a philosophy of quality that fits that of my own. Saab originally made military fighter jets, and this is especially noticeable in older models.

These cars are fast, luxurious and very comfortable, just like Moyo Go Studio (-:

Those cars have a comfortable cruising speed of 100 mph, wonderful details like soap-spraying headlight wipers, heated chairs and electrical sunroof but most important for me is the humongous cargo hold when the back seats are lowered (my car is longer than the one in this picture and has those typical isolated tiny back windows, I bought the 5-door model but the color is exactly the same, only much darker :). In Stockholm there is a Saab 900 taxicab that has a million km on the clock and it still has the same engine!

This blog entry illustrates another important point: That it is possible for a single person with very limited means to produce high-end, state-of-the art software that can compete at the highest level. Take the Swedish Saab Gripen (photo). Sweden, a country of eight million people, builds jet fighters on a par with the Eurofighter and can even compete with the Joint Strike Fighter. The Moyo Go Studio / SmartGo competition is similar. MoyoGo is made by someone with almost zero funds, SmartGo is made by a multi-millionaire, but that is often a liability as well, and I think ultimately, it will be its demise because Anders simply buys whatever is hard to program. He has bought the source code of his TsumeGo module (Thomas Wolf's GoTools), and he has bought the sourcecode for his Joseki module from MasterGo. The result: An unmaintainable hodgepodge of "not invented here" stuff that will gather dust and rust.

In the long run, Moyo Go will win because it's made of higher quality, in-house parts.
Posted by Frank at 9:06 AM