Speaking of asses, look what I found :-) 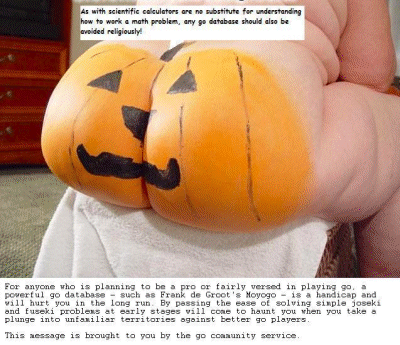 Some Go players still don't understand how Moyo Go's pattern expert system works. (When you read that PDF, note that "pattern" is not a move, but a potential move). This is often due to laziness (not reading the Help file). They think they are presented with an "analized position" or that they are getting "the solution to Joseki/Fuseki problems" or that Moyo Go presents them with the "best move".

And then they get very angry, or envious, or frustrated, and then they try to do as much damage as they can, using any possible way they can. Mark Boon, a strong Go player and Go programmer, when I offended his ego, offered 1000 USD for the first person to reverse-engineer MoyoGo's pattern system and throw it in the public domain. Philip Waldron, an even stronger Go player and a strong opponent of computer-assisted Go, said in the AGA eJournal that Moyo Go was nothing special, and should be avoided. And now, someone calling himself "Big Fan Of North Korea" (at least we have something in common) got creative on my ass and is shouting everywhere that he posted this image on the net. As part of my ass-symmetrical warfare against enemy combatants, I repost it here.

So - about Moyo Go's pattern system. It's not like a "scientific calculator". It is a pattern-recognition device (17 million normalized patterns) and a statistical database, for those patterns. Also, it is a hyperfast pattern-matcher (no time delay).

So, you move the mouse over board points and immediately you see browsable diagrams of the same local positions in other people's games, and how popular that move was in terms of statistical move likelihood in the average global context, winning percentages, average rank and -date, etc.

Moyo Go Studio is the "Google" of Go information. It's not a "calculator", it is a superfast, sophisticated search engine. Up to you to make the right searches, and up to you to do something with its information. All Moyo Go does is showing you the most likely moves, you have to judge those moves in their global context and you have to explore the alternatives, with or without using the program's search engine and pattern expert system.

Anyway - it's attacks like these that keep me going :-) Note how buttbuddy talks about "ease of solving Joseki and Fuseki problems". Totally missing the mark. I guess it's easy to misinterpret this kind of software. The idea is new. "Googling" Go game patterns - a revolution in the Go software world.

When Google started, all through its early years, there was a lot of noise about how "What you find on the Internet is mostly useless crap". And how "You can't manage to find what you are looking for, with Google". And how "It's much better to go to the library and find a reliable book about the subject". And "The ease of using Google to find information on the Internet will rot your brain".