I am the proud owner of no less than four SE Asian OSes. And I never, ever managed, over the past half decade, to install a single one of them, using a virtual machine (VMWare).

What does this screen say? What should I press? F3 gives a red countdown progress bar with another message, followed by a black screen and the inability to re-install.

The only way to repeat the process is to create a new VM.

I am trying different VM's, but so far, no luck.
Parallel Workstation doesn't work on x64, and Microsoft's Virtual PC does not even download. Instead it tries to save a "DownloadDetails.aspx" to my machine. That's using Mozilla. When using IE, I get the error: "This site may be experiencing problems". 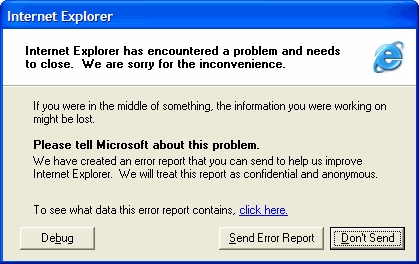 Brute Force and Nailing Jelly to a Wall

Since I am a weak-at-maths, testosterone-producing choleric, I greatly advocate the use of brute force to solve problems.

Don't get me wrong - I don't neccessarily mean physical force against living beings! Although it often helps too.

Example: When I was nine years old (32 years ago), my father put a lock on the door to prevent me from making firebombs with paint thinner and generally to prevent me from using his soldering torch, circle saw, collection of salvaged, formerly-wet firecrackers and other interesting stuff.

I did not see an easy method of opening that lock, when my parents weren't at home. So I used the "brute force" method: Me and a friend went door-to-door with the story that school had a project about keys. I made it all up. The story was that our teacher wanted to show us the differences between cyllinder lock keys and old-fashioned keys, padlock keys etcetera, yada, yada. An whether they could donate, for our educational project, some old, lying-around-in-a-drawer, unused keys.

They swallowed it hook, line and sinker and some got really excited about the thing, thinking it was an excellent idea of our teacher. After two key-scrounging expeditions, we had about two hundred keys. I kept them in an old cigar box. I was lucky that the lock on our attic door was a very cheap generic one and the key extremely simple, because one of the keys we collected fit.

It took my father a couple of years to find out that I had cracked the security on that door. Perhaps he noticed that the flammable liquids ran out too rapidly, and that the gas tank on his torch was usually near-empty.

I was quite a character. I had my own laboratory since I was six, it was another part of the attic, on the opposing side of my room. I did "harmless" experiments there, or so they thought. Just in case, I had placed sensors* at the bottom of the stairs that warned me when my father would sneak up to see what I was doing before I could hide the concentrated nitrous acid, hydrochloric acid and sulphuric acid. If you have that stuff, a selection of metals, some library books from the adult section (I was allowed to borrow adult books in that tiny village library, a right that funnily got revoked half a decade later, after I had read a few thousand books from the adult section) and a friendly pharmacist, you can make just about anything :-)

My parents didn't know, neither did they suspect, that I was synthesizing Nitroglycerine at home without using proper precautions. With hindsight, maybe my parents weren't so bad after all. They didn't deserve to be blown up, that's for sure. I can confirm that the stuff burns with a blue flame. And that you develop terribly painful black crusts on your nose when you try to smell too carelessly what's in an unlabelled bottle of concentrated sulphuric acid and your nose comes into contact with the bottle's rim.

It's off-topic, but fun nevertheless:
http://graeme.woaf.net/otherbits/jelly.html

Initially, my lab was stocked with bits & bobs my father didn't need, like very large 1.5 V batteries that he had stolen from one of his jobs, lots of wire, bolts and smallfry metal thingies. I did electromagnetic experiments with it. And I set steel wool to flames by shortcutting it. I also played with substantial quantities of mercury that I squeezed out of hearing aid batteries with something we call "bankschroef", in Dutch. And I tinkered with magnets. A lot. Soon, I went every Wednesday afternoon, out of school, with my bicycle through the streets in the industrial area to see what kind of electronic equipment companies had thrown away to be collected by the "bulky waste" truck.

What I could use for desoldering to build electronic devices I kept, and more complex stuff that looked expensive I took as well, because I had a much older friend that I traded some of that stuff with. He also bought acids for me when I needed them. Other stuff (like glycerol or aluminium powder and potassium chlorate) I got myself, with a little bluffing. But later they didn't sell any nitrates or chlorates any more, to nobody.

Those were interesting times. Nothing much to boast of, because a while ago, a kid in the US built a nuclear breeder reactor, demonstrating the old adage that persistence outranks talent and intelligence when it comes to achieving success.