The Birth of a New Machine 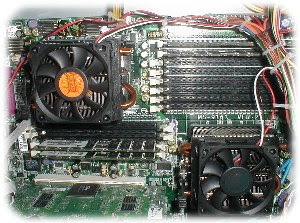 It has been quite a challenge to build a new PC. The problem was not putting all the parts together, but getting them to work properly. 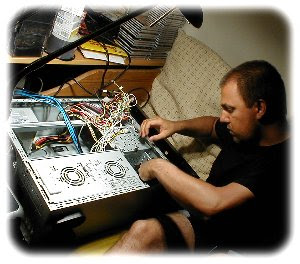 The machine in this picture is a dual Opteron dual-core 275, one of the fastest personal workstations on the planet. Sporting dual 20.3" LCD's, 4 GB RAM, several 15,000 rpm SCSI disks, 43,000 MIPS, 18 GFLOPS and 10 GB/s RAM bandwidth, its price tag is a whopping 11,000 USD - an investment into Moyo Go Studio's future. The next major development (apart from bugfixing and implementing features suggested by users) will be a massively multithreaded, 64/128-bit TsumeGo module, and this machine is where it will all come together. Now the only thing I still need is a gun, so that nobody will come and take it away from me :)

Why such an enormous expense? Ordinary desktop PC's of the future will have dozens of "cores", which are separate processors, the powerhouses of the computer. And they will all be 64-bit as opposed to 32-bit. Go software that does not anticipate this, will be doomed to play a minor role. Compared to what the average Go player will have on their desktop in a mere five years, my Colossus is not even special. Add to this the generous oil-wealth inspired Norwegian "HjemmePC Ordningen" - my employer lends me half and the government pays the other half - and I couldn't resist. UPDATE: I recently resigned my job so I had to pay almost the full price..

A major problem in creating a strong Go program is the speed of current computers, so taking full advantage of the (near) future's multi-core 64 bit desktop PC's is essential to staying ahead and coming out on top, eventually.
Posted by Frank at 3:46 PM