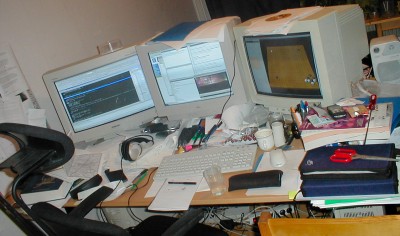 The mess on my desk (picture of three years ago - it's much better since I my girlfriend moved in with me and we got a new place) is inversely exponentially proportional to the mess inside the sourcecode of Moyo Go.

Him being a former tractor repairman and a self-taught code hacker, had never seen properly indented code. Not that his auto-didactness matters - I am like that too. One learns (or doesn't..) coding hygiene from decades of experience, I guess. It's a learning-from-one's-mistakes kind of thing. I wrote about coding standards here. I think that my traumatic exposure to RPG II might have something to do with my penchant for columnizing declarations and assignments.

Anyway - In a fit of Lymerage I told him in no uncertain terms that it would be best for the company if he and everyone else would adopt my coding standards. Our mutual boss thought it was all very entertaining and took me out for dinner. Soon afterwards, my chef got promoted away to a place where he couldn't do any harm.
Posted by Frank at 5:04 PM